Dr Smith completed his general dental training at The University of Queensland (Australia) in 1980, with honours. In 1981, Dr Smith worked as a general dentist on Thursday Island  then in 1982 and 1983 he worked as a dentist in England.

After returning to Australia, Dr Smith completed his specialist orthodontic training at The University of Queensland and was the first orthodontist in Australia to complete a three year Master’s Degree in orthodontics. Dr Smith has been in private practice at his current location in Toowoomba since 1987. Dr Smith is passionate about keeping up to date with the art and science of orthodontic care. He enjoys family time with his wife and two children. When not at the practice Ashley is often found training on his mountain bike. Despite moving to Toowoomba (an inland regional city) in 1987, Ashley has continued his love of competitive sailing, having represented Australia in several world championships.

Dr Smith is a member of The Australian Dental Association (ADA), The Australian Society of Orthodontists (ASO), The International Federation of Orthodontists and the Australian Damon Study Group. He regularly attends and presents lectures locally, nationally and internationally. Dr Smith attended the Insignia Core User’s meeting at Anaheim in October 2012 and presented the closing lecture. Prior to this meeting he visited the Insignia factory and discussed at length management of complex cases with the leading Insignia technicians.
Dr Smith lectured at the Damon forum at Phoenix 2014 ‘Design Down the Difficulty’, a lecture on managing difficult cases with the Insignia system. Dr Smith also lectured at the Korean Damon forum in March 2014 introducing Damon doctors to the Insignia system.

Dr Smith with his orthodontic partner, Dr Christopher Turnock, provides in office Insignia training for Orthodontists at their Toowoomba practice. Together they have started over 1000 Insignia cases. 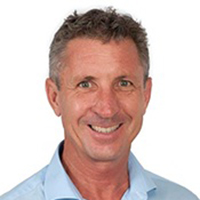